Sri Sadashiva Brahmendra Saraswati, more famously known as Sri Sadashiva Brahmendra, was a Raja-yogi and avadhuta, an enlightened recluse, from Southern India. He belonged to the 18th century CE and lived near Karur. His samadhi is in Nerur. In His younger days, He stood out as a prodigiously gifted student, often outshining even His teachers in arguments. One day, on knowing that His dinner was delayed due to preparations to welcome home His wife from her parents place, He discerned that family life was a recipe for misery. That day onwards, His pined for liberation from transmigration. His behaviour started to transcend norms; He even fed Himself from the refuse thrown on the streets. He found His guru in Sri Paramasivendra Saraswati under whose guidance He soon became adept in raja-yoga. For days, He would be lost in meditation on the sands of Kaveri. Though totally detached, He was a delight to children with whom He mingled as a child. The supernatural yogic powers that manifested in Him left people bewildered. It has been reported that people actually saw Him on the same day in multiple places so far apart as Kasi, Mathura and Ramesvaram. Immersed in the bliss of the Self and oblivious to the world, He would wander like a lunatic. When people complained to His guru about His madness, His guru envied Him and lamented that such madness was not His. Atma-vidya-vilasa is the ecstatic outpouring of Sri Sadashiva Brahmendra’s bliss of enlightenment and as an avadhuta. Brahma-sutra-vritti gloss on Brahma-sutras, Yoga-sudhakara commentary on the Yoga-sutras of Patanjali, Siddhanta-kalpa-valli as a versified version of Sri Appayya Dikshita’s Siddhanta-lesa-samgraha, Advaita-rasa-manjari, Atma-anusandhana, Swapnodita, Swanubhuti-prakashika, Navaratna-malika, Dakshinamurty-dhyana, Shiva-manasa-puja and Mano-niyamana are some of His numerous works. His classical and tuneful musical compositions are a treat by themselves, thanks to the seamless confluence of deep devotion and sublime truth in them. Manasa Sanchara Re, Sarvam Brahma-mayam, Chinta Nasti Kila, Gayati Vanamali, Bruhi Mukundeti, Khelati Brahmande, Piba Re Rama Rasam and Bhajare Raghuviram are only a few of them. It is only but natural that the great yogi and rapturous avadhuta, Sri Sadashiva Brahmendra, is as venerated even by the enlightened ones who have broken all shackles related to birth and death, as He is by common folk who sing His singular glories. 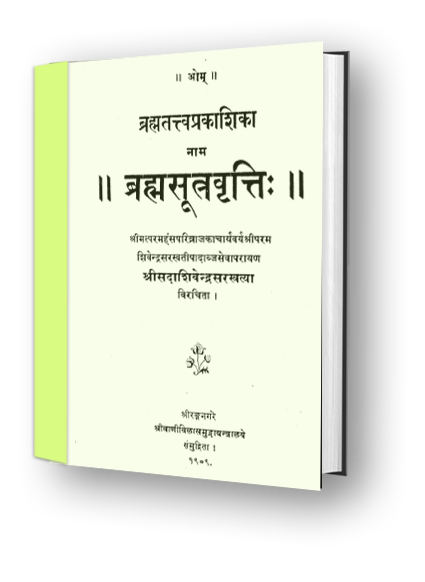