The picture displayed above is the idol of Sri Vidyatheertha Mahaswamiji at Simhagiri in Sringeri and seen flanking Him are His two foremost disciples Sri Bharathi Theertha Mahaswamiji and Sri Vidyaranya Mahaswamij who were the 11th and 12th Jagadguru Shankaracharyas respectively in the lineage of Sringeri Sharada Peetham. Between them, they have autored, individually and in tandem, several works of immense significance. Sri Vidyaranya is venerated a not merely as a bright star in the firmament of advaita and as a scholar par excellence across domains but also as the pre-eminent personality behind the revival of the Sanatana Hindu Dharma at a critical juncture when it was under the onslaught of Muslim invasion in the 14th century CE. He mentored and blessed the brothers, Harihara Raya and Bukka Raya, leading to the establishment of the great Vijayanagar Empire as a citadel of Hindu culture. The Sringeri Sharada Peetham that had remained a hermitage and a monastery became a spiritual imperium with state jurisdiction during his pontificate. To the Vyakhyana Simhasana, the Throne of Exposition, in the Sharada Peetham was added secular authority through this newly added dimension of the establishment. Thus, the honorifics Karnataka-simhaasana-pratishthapana-acharya, or the Acharya who was instrumental in establishing the Karnataka Empire, and Vyakhyaana-simhaasana-ahishwara, or the monarch who reins over the throne of transcendental exposition, duly fit him. Sri Vidyaranya was undoubtedly a broad-spectrum, prolific and impactful writer with a compelling style that bears his signature. His literary contributions spread over vyakarana, mimamsa, smriti, purana, astronomy/astrology, mantra-sastra, music, darsanas and advaita vedanta. Works from the duo of Sri Vidyaranya and Sri Bharathi Teertha include Jaiminiya-nyayamala, Parasara-smriti-vyakhyana, Smriti-sangraha, Vyavahara-madhava, Vivarana-prameya-sangraha, Drig-drisya-viveka, Aparokshanubhuti-tika, Brahmavid-ashirvada-paddhati, Anubhuti-prakashika, Pancha-kosha-vichara, Mahavakya-vivarana, Vakya-sudha and Nrisimha-tapani-upanishad-dipika. Besides hese, Brihadaranya-vartika-sara presents the essence of Sri Sureshwaracharya’s Brihadaranyaka-vartika. Panchadasi is among their oft-cited works; in fifteen chapters, it expounds topics of philosophical and spiritual importance employing catchy analogies. Jivanmukti-viveka deserves special mention; it is one of a kind. It authoritatively delves deep into the direct experiences of a sage liberated even while alive; it is beyond an iota of doubt that it could not have come from the pen of one who did not have the direct realisation of the Supreme Brahman. 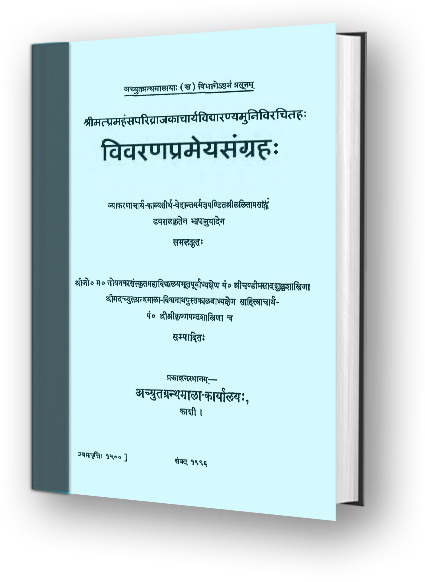 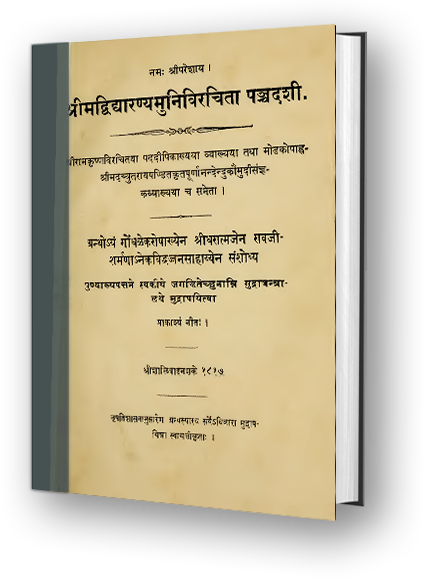 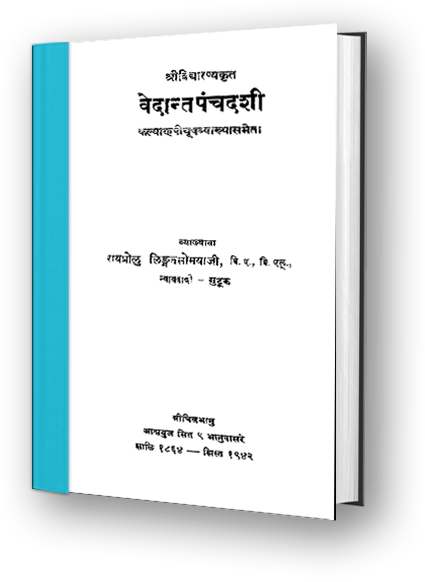 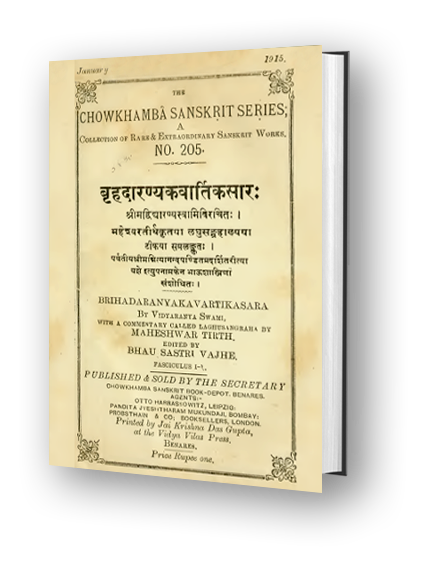 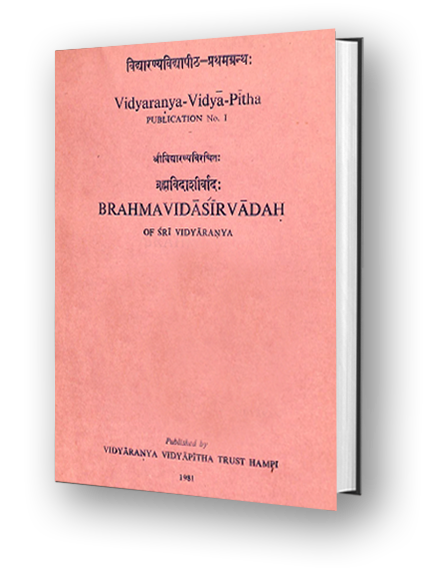 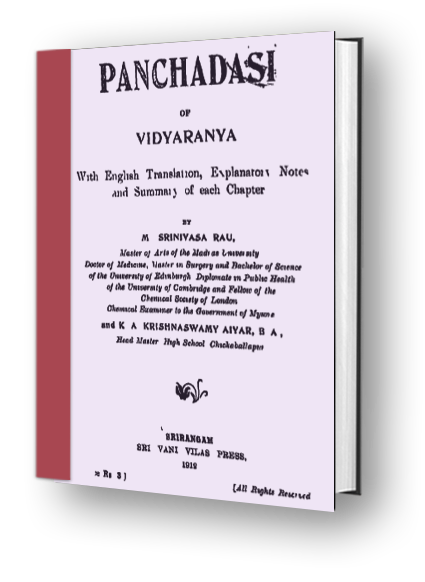 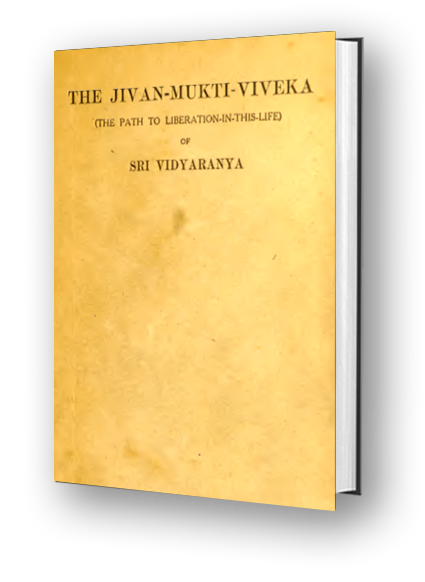 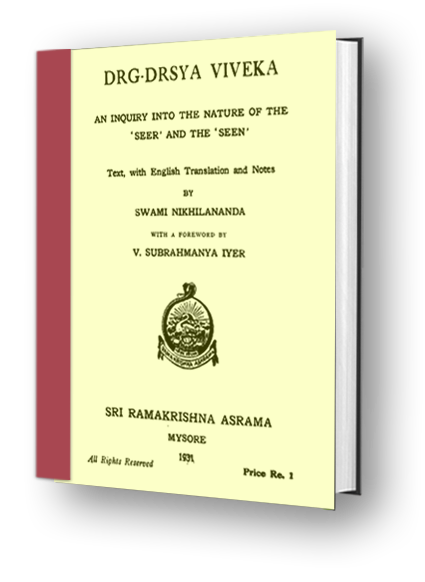 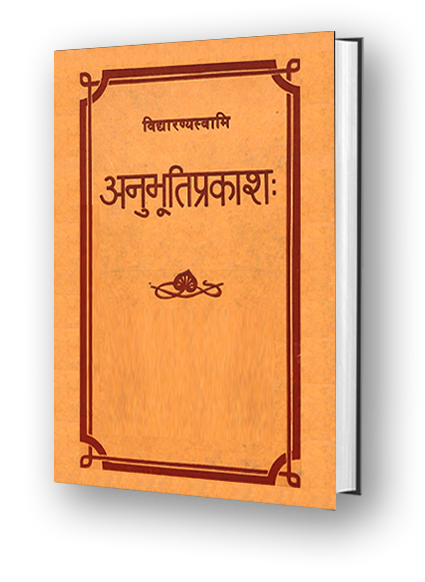